I spoke at the Shoreditch Ideas Club last night, an event that Hugh Garry organises for Shoreditch House.

I wanted to explore whether the act of collecting might have some additional extrinsic value beyond the collection itself. It’s also a bit of a confession (spoiler: it turns out that I collect collections) so if you end up skimming through this list, do re-join it when you see the wooden toadstools near the end. There’s a point. Honestly. This collection of spoons is probably my first collection. I collected tea spoons at every opportunity for a few years but now they’re in this box frame in my kitchen and I have not added to it for a long time. I’m not proud of the fact that quite a few of them are stolen from cafes and restaurants. I’ve always loved LEGO, but I started collecting it seriously at university, when this Star Wars stuff was new. A few years ago I sold a few sets on eBay (including this one), and as anyone who has sold something on eBay knows, Paypal money is easier to spend than money in the bank… I became a Lego trader for a while; buying in bulk and selling on eBay to the highest bidder. I ended up buying quite a lot of Lego. As you can see, it all got a bit out of hand. I now have a rather ridiculous collection. These days it’s actually sorted into little trays and my spare room is now an actual Lego studio. Oh yes. A lot of people want to know if I ever actually play with it. Not as much as I’d like, but I do sometimes make things. You’ll hopefully recognise the WOPR from War Games, the Usual Suspects and Chris Tarrant saying ‘we don’t want to give you that’ on Who Wants to be a Millionaire.

But really, other people make all the best stuff. That’s The Beatles, Abbey Road by Dunechaser, American Beauty by Matijagrguric, and Break’s Over by appius95, based on the level in Call of Duty Modern Warfare 2 called ‘Cliffhanger’.

This sort of scene on a small base is known as a vignette. I liked the form so much that I set up a Flickr group to collect them.

This is bliss for the serious collector; a public group like this is very passive way to build a public collection. Over the past few years I mostly go in a couple of times each month to do some gardening. The group now holds 8,000 photos from 1,700 users.

Let’s see. What else? A few years ago, I saw this photo from kaptainkobold (another adult fan of Lego), which he took inside the fridge with the door closed, using a self-timer and a flash. I thought “That looks fun” and quickly took my own, adding notes to annotate what each thing is. You can tell quite a lot about a person by the inside of their fridge. At dinner parties I would ask friends if I could take a photo of the inside of their fridge. They would open the door for me, at which point I’d have to explain that I was going to need them to shut it again and would they bear with me while the flash warmed up.

Of course I created another Flickr group called In the fridge to collect them. The rules are quite specific.

A few years ago I became mildly obsessed with finding examples of things being described as being the new something else.

Grey is the new black, 30 is the new 40, and so on. So I started finding and collecting examples of them.

Some people collect butterflies. I collected examples of the phrase ‘x is the new y’ and I was regularly going hunting, collecting them quite intentionally, in order to make directed graphs like this one. I’d look at the graph and spot interesting leads; gaps that needed filling. Tea is the new coffee and coffee is the new tea, Glorious. Friendster is the new Livejournal? What’s Livejournal the new one of? As I continued to collect them over a few weeks it grew into quite a big collection. I was quite surprised when The Boston Globe asked me if I’d extend it into something they could publish in their ‘Ideas’ supplement. They took my SVG files and employed actual graphic artists to make it prettier. My first front page. Of a supplement, but still.

[Update: I’ve just noticed this lovely new tool Built by Bloom using Twitter’s streaming API to show what people on Twitter are saying is the new something else.]

I’ve always loved this joke and for a while collected variations on it, writing them down in a list. I went on holiday recently to Poole. In Dorset? Yes, I’d recommend it to anyone. You get the idea.

So my friend Nick O’Leary and I built a website to collect these jokes and let other people contribute their own.

And because each one is on a map, you can find jokes for a specific place. It continues to attract new additions, and has expanded my pencil-and-paper list of a dozen ‘Jamaica’ jokes up to about 800 jokes over the past four years.

The Internet fridge has long been the default example of what we can expect in the near future. Imagine a fridge which knows when you need more milk… I can surf the net, cook and keep an eye on my children at the same time… Urgh. Pretty much every tech company makes one, but very few people seem interested in buying them.

More recently, I’ve started another ridiculous collection: photos and videos of things riding on the back of other things.

YouTube appears to be literally full of videos of things riding on the back of other things. I go digging for them, but people suggest a couple of new ones every week. I also maintain this grid of things riding on the back of other things. Want a photo of a monkey riding on a pig? Just find the right row and column. The more examples there are in that category, the bigger the dot.

I collect interesting links and send them out in a weekly email newsletter. As a side effect, it gives me something else (beyond the links and the subscribers) to collect; the number of Out Of Office emails I receive for each email sent. Unsurprisingly, it spiked a couple of times during the summer. What will happen in at Christmas? I can’t wait to see.

I didn’t mention this one during the presentation, but I’ve since remembered that I used to take photographs of all the books I read every month, and write a quick review/summary of each month’s reading. I’d forgotten that one.

There are some amazing collections on the web and, unsurprisingly, many of the best ones are not maintained by me…

So. Is there a point to all of this?

Putting this presentation together gave me ample opportunity for self-reflection, and I sort of want to justify myself. But:

All of those things are true, but I think it’s actually simpler than that. It’s a hobby. My dad has a stressful job, and he sometimes makes wooden toadstools to unwind. It gives his hands something interesting but unimportant to do, and helps him relax.

Now, I know what you might be thinking; this is classic procrastination. But my collections (and my Dad’s wooden toadstools) are not about intentional procrastination. ‘Sharpening pencils’ when you should be writing or drawing is risky because it’s too easy to confuse it with what you should be doing. If someone walks in on you sharpening your pencil you can claim to be just getting ready to start. If you’re collecting pictures of Colonel Gaddafi shaking hands with world leaders though (oh yes, that’s another one), then it’s pretty hard to convince anyone – let alone yourself – that you’re doing anything useful with your time.

And that’s the point. It isn’t about making something useful. Making or collecting something is not always about getting your day job done directly. Yes, it might help develop your taste, and it might even be beautiful in its own right, but the real benefit is letting your subconscious mind unwind. Not with something too taxing (or the stress returns), and not something too easy (otherwise your mind will wander). The perfect hobby is something that requires just enough attention for your conscious mind to become occupied with something interesting but unimportant, freeing your subconscious to wander around solving problems. 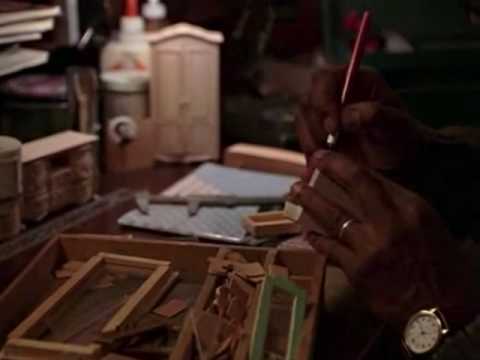 Think of Lester Freamon in ‘The Wire’, quietly making his dollhouse miniature furniture. It’s a perfectly absorbing activity. Other people prefer to knit (someone at W+K used to knit in meetings, which might stop working when you get too good at it). Some people write Haiku. We shouldn’t be surprised that people who spend a lot of time online have online hobbies too.

For me, my preferred way to relax is collecting things and putting them on the internet.

Thank you to everyone who heard this presentation and didn’t ask where do you find the time?

3 replies on “Some of my collections”